I miss writing my blog. I know it's not the cool thing to do now with Facebook and Podcasts but I really enjoyed it and I'm hoping to get back to it.

How about some visual updates? 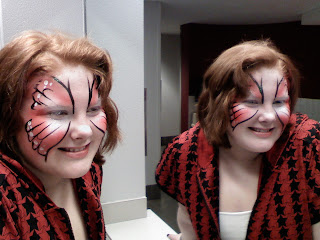 Last week I took Auburn Aries to a Trail Blazers basketball game. We grabbed some sushi and took the train to the Rose Garden and caught the game with some of her classmates and their parents. The seats were nose bleed but it didn't matter. The Blazers won and we had a ball. And look at my baby. She's so cute. 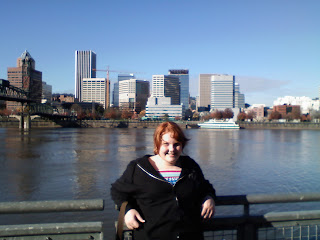 While on a field trip with AA's class, I took this shot of her downtown. Some field trips can be a drag but every once in a while there's one that's not so bad. We walked the waterfront and got a history lesson from some Portland guides. 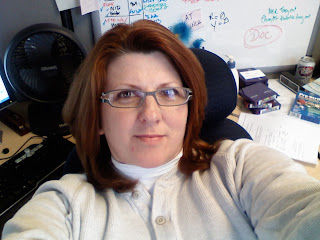 I took this with my phone earlier this year. I no longer have dyke hair! It's about three inches longer now. Auburn Aries says that I look crossed-eyed. It's just the glare from the window. Growing it out sucked but it's been worth it. I love it being long again. 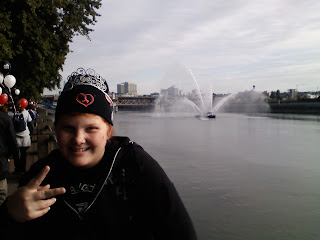 In October, Portland held their annual AIDS Walk. The Boys and I all participated. There are pictures of me but I look fat so you can't see them! I will, however, show you Auburn Aries..
In December I dropped Auburn Aries off at her Dad's for part of winter break and headed to Pony's house for an overnighter. I started working from home full-time so getting away and having cocktails with friends was first on the list. Little did I know the anticipated snow storm the news stations named Arctic Blast 2008 would be as serious as it was. I ended up snowed in four days with absolutely no ability to get Stella off Pony's street. 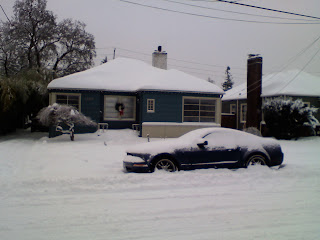 It did get worse as the days wore on. I think I took this picture on day two of the sleepover.
Things with us have been up and down. Sometimes I don't think I can take anymore onto an already full plate. Other times, I take a deep breath and am thankful that I am exactly where I'm supposed to be. It could be worse.
Gotta close for now so I can cook dinner. More tomorrow.
Posted by auburnpisces at 5:04 PM