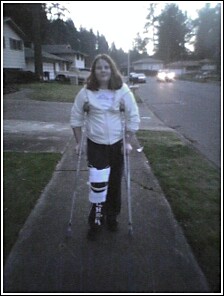 We picked up the crutches at Walgreen's immediately following our E Room visit last week. I adjusted them and attempted to explain to Aries how to use them. She watched impatiently yet looked excited when I handed them to her. As an adult, I had forgotten that things like crutches excite kids. The same way braces do. Go figure. She struggled with the crutches but did not give up.

The last time I was on crutches was when I studied dance. My girlfriend at the time, Jenny, and I were in a dance together. We traveled full-tilt boogy to the right, did this huge jump in the air and had to change directions while in the air. We both hit the dance floor like rocks. She broke her elbow and I sprained my knee. That, however, was so long ago I'm afraid I wasn't much help in the compassion department when it came to Aries. I was more frustrated at her lack of listening ears. I had to take a step back and let her figure it out on her own.

We went to the grocery store following the crutches lesson. Probably not the best idea but it had to be done. As Aries hobbled toward the entrance an employee of the store looked at her and laughed and pointed out that she could use one of those electric chair/cart things. Damn... you'd thought she was just offer cuts in line at Disneyland. The girl brought me a key and Aries took off like a shot. She wasn't even unplugged from the wall yet.

I didn't give the electric cart much thought until I remembered that Aries doesn't know how to drive. Nor is she that confident on her bike. Thus, steering was going to be much like the crutches escapade. I took off after her yelling her name and laughing.

When I caught up with her, she was laughing and steering like a crazy person. People coming toward her looked frightened - they weren't sure which direction to go to get around her. Upside was I didn't have to push a shopping cart because there's one built onto the front of the electric car. Downside is a 12 pack of Charmin will block her view creating poor driving conditions. However, those driving conditions are hilarious when you're on the "watching" end.

Aries would drive down the very center of each aisle making it impossible for people to get around her. She would turn her wheel and move forward in an attempt to back up and move out of the way or turn around except the concept of turning the wheel the opposite way was beyond her grasp.

I stood there trying to guide her through constant laughter.

AP: Aries, turn the handlebars the other way.

AP: The opposite way.

AA: The opposite way of WHAT?!

AP: Right now you're turning to the right. When you back up, turn to the left and it will swing your fanny the other way so you'll have room to get turned around.

AP: Oh dear gawd. Turn the handlebars counter clockwise to get out.

AP: [laughing hysterically] Holy shit, hang on. [I walk over and place my right hand on top of her right hand and make a four inch movement counter clockwise]. Now...go backwards.

It was a combination of wanting to throttle her, laughing until I cried and wanting to yell at her for not just doing what I asked.

We got to the self serve check out and I began whipping everything across the bar code reader when this extremely tall, large woman with a dog on a leash walked up to Aries and said she wanted to use the cart when she was done with it. Aries, promptly asked me for her crutches and started to get off the cart.

Having been taken advantage of quite a bit lately, I was in no mood to have some stranger bossin' my kid around. I quickly told Aries too sit her butt down, turned to the obviously healthy woman who has good working legs and told her she could have it when we were done with it. She was welcomed to wait. The woman disappeared to a bench in the pharmacy and sat down.

I didn't see her trying to roll some old fart for their cart.

I quickly reminded Aries of the fact that it's okay to take care of yourself and put yourself first.

When we concluded our shopping, I then told the woman we'd be back and went to the bank. I'm so bad. On our way back through the big woman jumped up and acted like she expected us to gather our things on some magic carpet while Aries crutched her little ass out to the car. I invited her to *walk* outside while I pulled the car around. Which she did.

Aries and I laughed all the way home about our adventure. She was only on the crutches for two days...thank Goddess. Though she didn't feel it was necessary, she's still braced up this week. I watched her last night and she was walking around the house without my hesitation. When we discussed the wearing of the brace for the next couple of days she replied, "Well, I guess that's the consequences for turning wrong and bonking into a chair and hurting your knee. Guess I'll live."

Indeed she will as long as I have anything to say about it.
Posted by auburnpisces at 9:27 AM