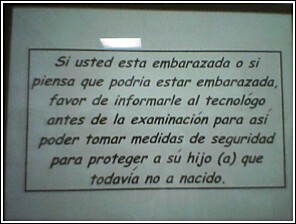 So while sitting in X-ray, this sign posted on the wall. Aries read the thing in its entirety. She did not do the Spanish language justice, trust me.

We looked everywhere for the English version so we could compare the two, but one did not exist.

I told Aries last night that I had posted about her knee and the crutches to which she replied, "Yeah, but you said you'd ask about the sign on your blog. Did you ask anyone what it said? I can't not know what it said..."

So I am about to rob blogdom of five minutes it's never going to get back. What the hell does this sign say? Aries and I laughed about how neither of us speak Spanish and should. She said that as much mexican food as we eat, we should know how to speak Spanish automatically. How I wish it were that easy!

Posted by auburnpisces at 12:02 PM