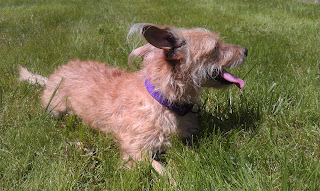 Trixie goes nearly everywhere with Auburn Aries and I.  So long as we’re not getting out of the car, she’s welcome to go with us.  Trixie has separation anxiety so leaving her in the car to, say, run into the little market down the street is a no-go.  In fact, the first time I did it, she peed on my seat in my Mustang.


She can be left in the house on her own just fine, although you don’t want to leave the trashcan out or leave a package of Oreos on the coffee table with five cookies in it.  We made this revelation a month after we got her.  She was one and half; we were naïve.


She’s a long-hair Jack Russell mix (with Dachsund, I believe) and her energy is higher than any dog I’ve had before.  She’s a good dog, but I should have Googled that breed before we adopted her.  Not sure it would have made a difference in adopting her but I’d have been better informed.


Trixie does get me out of the house for walks and working from home full-time feels like you never leave your house some days.
While riding in the car a few days ago, I noticed in the side mirror that her nails had gotten long again.  Over the past year, she’s really grown to trust me.  She was found as a stray in LA and I believe the people who owned her before were mean to her.  Especially the man in her life.  She hates men.  Auburn Aries and I joke about her being a man-hating lesbian.


Anyway, cutting her nails myself took time and trust.  It wasn’t the same as cutting Sugarbear’s Chihuahua nails.   That took less than a minute.  So a couple nights ago, I laid her on her back on the couch and I’m talking to her and I’m rubbing her belly in between paws and things are clipping moving along fine when I move to her back paw.


I clip the first nail fine.  I’m just taking off the very tips, no real length to speak of.  I line up and clip the second nail and she yiped and pulled away.  I see blood on her foot instantly.


I scoop her up and hold her close to me.  She’s trembling and nuzzled as close to my neck and she can get.  I wrapped a napkin that was on the coffee table around her foot try to sooth her.  I had hurt our little baby.  She trusted me and I messed up.

I’d never cut a dog’s nails to the quick before.  I’ve always been so careful not to.  I called out for Auburn Aries and asked her to bring her laptop.  While I was hugging the dog and crying, she was Googling what to do.  Trixie’s nail wouldn’t quit bleeding.  I couldn’t understand why it was bleeding so badly.  I knew I hadn’t cut too much off her nail but obviously something happened.


Aries read that if you take baking powder and dip the nail into it.  It’ll stop the bleeding immediately.  Which we did, and it did.  Not directly into the container, mind you, but into a small bowl. Trixie trembled and trembled and I cried and cried.


The downside was if she went outside to pee, the wet grass would dissolve the baking powder and the bleeding would start again.  I didn’t have a Styptic stick, nor did I know what that even was until a coworker told me about it the next day.  In fact, Aries discovered the type specifically for dogs so you can dip their nail into it.  I’ll have to make sure to keep one around for next time.


Hopefully there won’t ever be a next time.


It was a long night that night.  I’ve since had a chance to look at the nail.  As it turns out the nail was split.  When I cut it, it split it further back to the bleeding point.

It doesn’t eliminate the guilt but I think I’ll keep my day job and stick to what I know.
Posted by auburnpisces at 3:06 PM 1 comment: